SAINT JOHN, N.B.– Kaitlyn Weaver and Andrew Poje of Waterloo, Ont., broke the Canadian ice dance record and Alaine Chartrand made a comeback for the ages for the women’s gold to highlight Saturday’s action at the 2019 Canadian Tire National Skating Championships.

Not to be outdone, Nam Nguyen of Toronto returned to the top in the men’s event while Kirsten Moore-Towers of St. Catharines, Ont., and Michael Marinaro of Sarnia, Ont., dominated in pairs.

In ice dancing, Weaver and Poje won the gold medal with 213.78 points and Piper Gilles and Paul Poirier of Toronto were second at 212.31. Both scores were over the previous Canadian record of 209.82 set by Olympic champions Tessa Virtue and Scott Moir at last year’s nationals.

The top-two couples not only wowed the crowd with excellence but moved them with emotional routines.

“It’s a different kind of year for us,” said Poje. “We want to do what pleases us and show what we’ve learned throughout our entire career with all the ups and downs.”

It was a third career national crown for Weaver and Poje, world championship bronze medallists last year. They also won in 2015 and 2016.

Laurence Fournier Beaudry and Nikolaj Sorensen of Montreal were third at 198.41.

Chartrand soared from fifth place to win the women’s gold. She opened with a triple-triple combo and never looked back en route to a total score of 185.91 points. Aurora Cotop of Thornhill, Ont., was also on the comeback train jumping from sixth to second with 169.35. Véronik Mallet of Sept-Iles, Que., was third at 168.53.

Gabrielle Daleman of Newmarket, Ont., and Larkyn Austman of Vancouver, 1-2 after the short, had rough free skates. Austman was fourth and Daleman, the defending champ, fifth.

It was a second career national crown for Chartrand and first since 2016. Her free skate on Saturday was 16 points better than her closest pursuer.

“Today was the redemption I was looking for,” said Chartrand. “It felt really special. I was working through being methodical and not looking too far ahead. It worked well  for me. Once I was done all the jumps I could really let it go and hear the crowd roar as I came around the end.” In the men’s event, Nguyen landed his seven jumps which included two quad Salchows to open his free skate for 258.01 points. Stephan Gogolev of Toronto, looking to become the youngest Canadian men’s champion ever at 14, followed at 253.56. Keegan Messing of Sherwood Park, Alta., was third at 247.44.

“I was so nervous,” said Nguyen, whose previous national title was in 2015 at age 16. “My first thought before the first quad was don’t have any regrets. That helped me push through. The take off was shaky, I didn’t know where I was in the air.”

“I just thought: ‘Please help me.”

There was no surprise in pairs as Moore-Towers and Marinaro placed first with 202.75. Evelyn Walsh of London, Ont., and Trennt Michaud of Trenton, Ont., followed at 189.87 and Camille Ruest of Rimouski Que., and Drew Wolfe of Calgary were third at 166.84.

“It was a little bit harder out there than we anticipated,” said Marinaro. “We laboured from the starting pose to the ending pose. Evelyn and Trennt laid it down before us and put some pressure on us.” 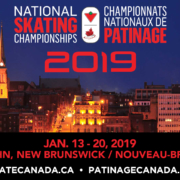