BRATISLAVA, Slovakia – Alicia Fabbri of Terrebonne, Que., and Paul Ayer of Brossard, Que., took fourth place in their international debut as a team on Saturday in ice dancing to conclude the first stop on the ISU Junior Grand Prix figure skating circuit.

It was a 1-2 Russian finish with Elizaveta Khudaiberdieva and Nikita Nazarov first with 160.24 points and Elizaveta Shanaeva and Devid Naryzhnyy second at 152.42. Eliana Gropman and Ian Sommerville of the U.S. were third at 148.96.

Fabbri and Ayer, who both skated with different partners last year, produced the sixth best free dance but remained in fourth place in 136.04 less than three points ahead of a French couple.

‘’We showed a bit of stress skating our first free dance together internationally,’’ said Fabbri, 15, whose skates were lost in travel but eventually arrived in time. ‘’We were pleased with the free dance minus one error.’’

The couple says they are pleased with the progress of the partnership.

‘’We connected pretty quickly,’’ said Ayer, 20. ‘’There were so many changes I wasn’t sure initially how we were going to click right off the start but I don’t remember being a time we didn’t click even in the try-out.’’

Nadiia Bashynska of Markham, Ont., and Peter Beaumont of Unionville, Ont., scored the fifth best free dance but remained in ninth at 124.64. The couple remained unfazed after someone threw a toy stuffed animal on the ice in the middle of their performance.

‘’We noticed it right away, said Bashynska. ‘’We talked to each other and guided each other where we were going. It actually happened to us once before so we knew what to do in the situation. Just no matter what, keep calm and do your thing.’’

In women’s competition, Russians were 1-2 again with Anna Shcherbakova first and Anna Tarusina second. Young You of South Korea was third.

‘’I feel like it was a good start to my international season,’’ said Schumacher. ‘’I fought through my program today. But I feel I’m ready for the rest of the season.’’

Canada ends the competition with one gold medal earned by 13-year-old Stephen Gogolev in the men’s event on Friday.

The second stop on the circuit runs this Thursday to Saturday in Linz, Austria. 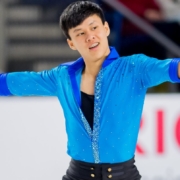