OTTAWA, ON: Skate Canada will have four entries, for a total of six skaters competing at the 2015 NHK Trophy in Nagano, Japan. Canada will have one entry in men’s and ladies, and two entries in pair at the event which takes place from November 26-29, 2015 at the Nagano Wakasato Tamokuteki Sports Arena.

Elladj Baldé, 25, Pierrefonds, Que., will be the Canadian entry in the men’s category. Last season, he placed sixth at this event. This season, the representative of CPA Anjou Kinsmen won gold at the Nebelhorn Trophy and placed 11th at the Cup of China. Baldé trains in Montreal, Que., with coaches Bruno Marcotte and Manon Perron.

Two-time Canadian champion and Olympic silver medallist (team) Kaetlyn Osmond, 19, Marystown, Nfld., will represent Canada in ladies. This will be her first time competing at this event. Earlier this season, she won gold at the Nebelhorn Trophy and placed 11th at Skate Canada International. She is coached by Ravi Walia and represents the Ice Palace Figure Skating Club.

World champions and Olympic silver medallists (team) Meagan Duhamel, 29, Lively, Ont., and Eric Radford, 30, Balmertown, Ont., are the first of two Canadian pair entries. The representatives of CPA Saint-Léonard are the defending champions at this event. This season, they won gold at the Skate Canada Autumn Classic International and Skate Canada International. The four-time Canadian champions are coached by Richard Gauthier, Bruno Marcotte, and Sylvie Fullum at CPA Saint-Léonard.

Lubov Ilyushechkina, 24, Moscow, Russia, and Dylan Moscovitch, 31, Toronto, Ont., are the second Canadian pair entry. This will be their first time competing at this event. Earlier this season, the representatives of the Toronto Cricket, Skating and Curling Club placed fourth at the Ondrej Nepela Trophy and seventh at the Cup of China. The Canadian silver medallists are coached by Lee Barkell, Bryce Davison and Tracy Wilson. 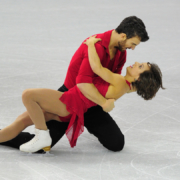