OTTAWA, ON (September 26, 2022) – Over 180 skaters from ten different nations were represented over the weekend at the ISU International Adult Figure Skating Competition, which took place from September 21-24 at Ottawa’s Bob MacQuarrie Recreation Complex. The event hosted a wide range of categories, with athletes aged in their thirties all the way to their eighties competing.

New Brunswick’s Pat Noddin, now 86 years of age, competed in the Bronze Women’s Artistic class V and left the crowd in tears as she competed on Thursday night. The event was a great showcase of the adult skating community and served as a great reminder that skating is a lifelong sport.

“What I’m loving most about this event is that the athletes all love and support each other,” said Manley. “Normally at competitions you stay away from competitors, but these skaters are cheering each other on; it doesn’t matter if you’re from Canada, the United States or Mexico, everybody loves everybody.”

Skate Canada will be hosting a Community of Practice webinar on October 11 around the topic of Adult Skating and Skating Pathways for all ages. To register, click here.

The next ISU International Adult Competition will be held in Oberstdorf, Germany from May 15-20, 2023. For more information, visit the ISU website.

OTTAWA, ON (September 19, 2022) – Over 175 adult skaters from around the globe will be converging in the nation’s capital this week for the ISU International Adult Competition, which will take place from September 21-24, 2022 at the Bob MacQuarrie Recreation Complex.

This competition is targeted at adult skaters who have reached the age of 28 and synchronized skaters who are between 25 and 78 years of age. The 2022 International Adult Figure Skating Competition will include the following categories:

For more information including the schedule, please click here. All events will be live streamed and can be accessed through the event page or Dailymotion.com.

OBERTSDORF, GERMANY: For the first time in three years skaters had the opportunity to compete at the ISU International Adult Figure Skating Competition in Obertsdorf, Germany.  The event took place from May 23-28, 2022.

Since the ISU competition began in 2005, Canada has been well represented over the years by the number of competitors as well as in medals won.  This year the Canadian contingent was smaller than in past years with six athletes, but the results were impressive with Canada bringing home six gold medals. This competition included more than 350 skaters representing 28 ISU Members. 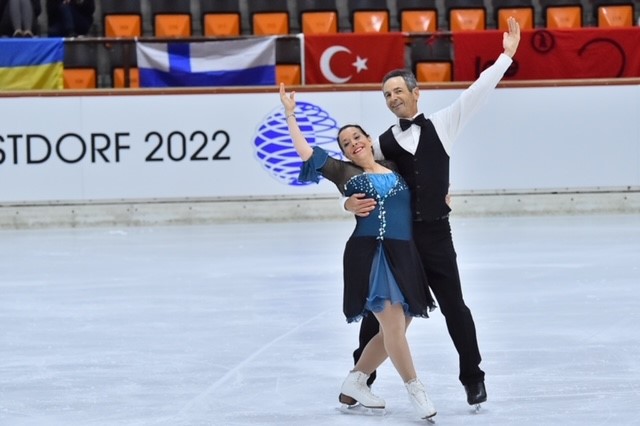 The next adult ISU competition will be held in Ottawa, Ont., from September 21-24, 2022. The ISU International Adult Figure Skating Competition will also return to Oberstdorf, Germany from May 15 – 20, 2023.