It is the first time ever that Canada has won two medals in the same event at a world juniors which were launched in 1976.

‘’It’s a pretty surreal feeling that we are on the podium and it really hasn’t sunk in yet,’’ said Waddell.

D’Alessandro and Waddell conclude a successful season, most recently capturing the silver in February at the Egna Dance Trophy and gold in January at the 2022 Canadian Tire National Skating Championships.

‘’We didn’t have placement expectations here,’’ said D’Alessandro. ‘’We didn’t want anything blocking us from skating the way we know we can. We wanted two skates in which we didn’t hold back going into the elements.’’

In addition to their medal on Sunday, Bashynska and Beaumont took silver at nationals this season and bronze at the ISU Junior Grand Prix in Linz, Austria.

‘’We just aimed for a clean skate with this new program and we delivered,’’ said Beaumont. ‘’We were super pleased with the result.’’

‘’We were definitely aiming for a top-five so we could assure three Canadian entries at the next world juniors,’’ added Bashynska.

In women’s competition, Isabeau Levito of the U.S. took the gold with Jia Shin of South Korea second and Lindsay Thorngren of the U.S. third. 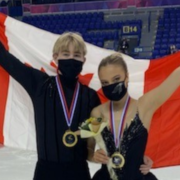