Phan of Laval, Que., looking to improve on last year’s fourth place, is sixth at 77.89 and Gogolev, the junior Grand Prix Final champion, is 10th at 77.00. There are 37 entries and the top-24 advanced to Friday’s free skate.

In his short, the 17-year-old Phan touched down with his hand on his triple Axel and also landed his triple flip and triple Lutz-tripe toe combo.

“It was a bit shaky in the beginning but I thought it was good,” said Gogolev. “I tried to approach it as a normal competition. I think I need to settle down a bit more for the free so I can be calmer.”

In pairs, Russian teams are 1-2-3 after the short led by Polina Kostiukovich and Dmitrii Ialin in first.

Brooke McIntosh of Etobicoke, Ont., and Brandon Toste of Mississauga, Ont., are 10th and Gabrielle Levesque of Bridgewater, N.S., and Pier-Alexandre Hudon of St-Roc-des-Aulunaies Que., are 15th.

Competition continues Thursday with the rhythm dance and the pairs free skate. 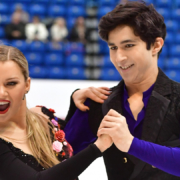