Alina Zagitova roared back from fifth place after the short program to win the gold and provide Russia a 1-2 finish with 213.80 points. Maria Sotskova was second at 208.78 and Osmond took third spot at 206.77.

Osmond topped the short program standings Friday and was ranked fourth for her free skate. She clinched a spot in next month’s Grand Prix Final. She won Skate Canada three weeks ago.

Her ‘Black Swan’ free routine was highlighted by five clean triple jumps, but she fell on a triple loop and singled an Axel.

“It wasn’t great,’’ said the 21-year-old from Marystown, N.L. ‘’I made a few mistakes, but overall I felt like I skated a strong program and the things that I’ve done, I’ve done at the best I could do. (In the Grand Prix Final) I mainly want to improve on my performances here, skate a clean short and to improve my long program, make it cleaner.”

In ice dancing, Kaitlyn Weaver and Andrew Poje of Waterloo, Ont., delivered a strong free dance to ‘Je suis malade’, although Weaver had displaced her rib recently. They earned 176.97 points for fourth, edged off the podium by just 0.27 points. They were fifth after the short.

Gabriella Papadakis and Guillaume Cizeron of France took the gold with 201.98, Madison Chock and Evan Bates of the U.S. were second at 181.85 and Alexandra Stepanova and Ivan Bukin of Russia were third at 177.24.

Canada came close to a medal again in pairs as Lubov Ilyushechkina and Dylan Moscovitch of Toronto took fourth spot at 193.07, just 4.5 points back from third.

Evgenia Tarasova and Vladimir Morozov of Russia won the gold with 218.20, Vanessa James and Morgan Cipres of France were second at 214.32 and Nicole Della Monica and Matteo Guarise of Italy were third at 197.59.

‘’Definitely some highlights for us in the free program,’’ said Moscovitch. ‘’It was an improvement from the last two times out this season. We’re still leaving a few points out there on the table and we want to clean those up moving forward.’’

Canada had no entries in men’s competition. 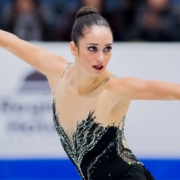