Piper Gilles recalls many childhood moments with her mother, Bonnie, dressing up her and her twin sister, Alexe, in princess costumes and toting them to Disney on ice shows.

Not surprisingly, the Gilles twins, now 22, went on to become skaters.

Alexe indeed has become a skating princess, and Piper, is a competitive ice dancer, and their mom couldn’t be more proud.

This weekend, Piper will be competing as an ice dancer in Skate Canada International with Paul Poirier, while Alexe, a former competitive singles skater, will be skating in the role of Disney’s trendiest princess, Elsa, from the hit movie, “Frozen.”

“My mom used to dress us up all the time,” Piper said with a laugh. “I think she had the most fun at the shows. Now it’s so fun to be in the stands and watch my sister in the show. It is so cute to see all these girls dressed up to see her skate.”

Piper got a chance to see Alexe perform in the “Disney on Ice’ Princesses and Heroes Tour,” earlier this month. Piper had just skated to a silver medal at the Skate Canada Autumn Classic in Barrie, Ont. Then she and her mother and Alex Johnson, a skater who is a longtime friend of Piper’s and Alexe’s, hopped in the car and drove about four hours to Detroit.

“We wanted to see her perform in her opening show,” Piper said. “It was great. When we got there everyone was in the spirit. You got cotton candy and you would see crowns and Elsa braids. Everyone was singing the songs.”

They ended up going to the show two nights, and Piper left with an added appreciation of what he sister is doing. Yes, the show is fun and the kids are enjoying seeing their favorite princess come to life on the ice, but life on the tour is not easy.

Alexe is performing difficult routines, some include double Axels and triple toe loops, and they do them while wearing heavy costumes and elaborate wigs. Alexe said her braid is attached to her dress with a magnet. Often the skaters perform in multiple shows a day and are in and out of cities.

“It’s fun though to see a different side of skating,” Piper said. “It’s very character-based and it’s fun to see some of the skaters skating and lip-synching and things like that.”

Alexe said her role as Elsa is “pretty magical,” and loves meeting with children who are starry-eyed when they see her in full Disney regalia.

“Competitive skating is so much more stressful,” Alexe said. “This is more of a personal reward … hearing little kids in awe of you instead of being judged.”

Alexe, who won the 2008 U.S. junior title and later competed as a singles skater for Canada, had been coaching in Colorado Springs when she heard about tryouts for the Disney tour.

She began rehearsing with the tour in Florida in July and started touring with “Frozen on Ice.” Then Disney made a separate segment with “Frozen” numbers in its “Princesses and Heroes Tour” and Alexe was traveling back and forth for a while between the two shows.

This weekend, Alexe is in Cincinnati and will be checking online to find out results from her sister’s performances at Skate Canada in Kelowna, British Columbia.

As twins, the two have always been close, so the great distances between them lately has been difficult. Bonnie Gilles has been traveling quite a bit to see both of her daughters skate. She was in Atlanta for several Disney shows and then at Piper’s competitions. She is in Kelowna this weekend.

“I love watching the Disney shows,” Bonnie said. “And Elsa is the role of a lifetime. She wanted the role and was lucky to get it.”

“I think my mom went to the show like seven times in Atlanta,” Piper said with a laugh. “She knows all the songs, when the fireworks come. I had to tell her not to tell me anything so there would be some surprise.”

Before Piper had teamed up with Poirier in 2011, she, too, had considered performing in shows such as Disney on Ice.

“I had quit (competitive) skating for a year and was looking at show skating but I wasn’t ready to be done,” Piper said.

She is glad to be still competing. Although an ankle injury disrupted his training last season and she and Poirier finished fourth at Canadian nationals — one spot shy of making the Olympic team in Sochi — they placed eighth at the worlds championships and have high hopes for this season. This weekend, Piper will be focused on the Paso Doble for her short dance and are skating to a free dance with big-band music.

The two likely won’t be able to see each other over the holidays because of their travel and training schedules. But they will be thinking of each other and rooting for each other.

“It will be the first time we won’t be together for Christmas and won’t feel like Christmas without her,” Piper said. “Maybe we will just put Frozen on repeat all throughout the holiday.” 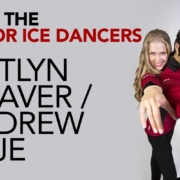