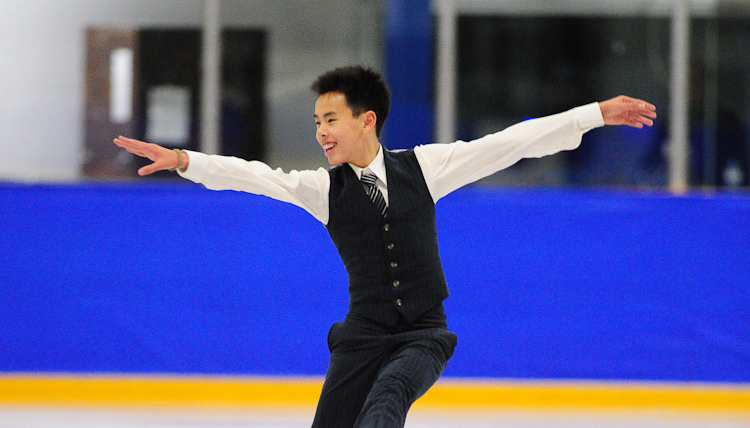 Barrie, Ont. – The Skate Canada Autumn Classic International is Canada’s first senior B international event and who did they get to fill the holes on the ice during the remake after the women’s short program? World champion Jeffrey Buttle, his ID flying around his neck, with his bare hands, watching for every crease.

Buttle trained at the Mariposa Skating Club at the Allandale Recreation Centre for many years, and above his head is a plaque, bearing his name and achievements. Now he can add ice bucket boy to them.

And even better, the crowd knew they were in a place with a sign at the end of the arena that said: “You are now in quad country,” so because of the multiple-rotating Elvis Stojko, but Buttle too landed his rare quad toe loop – triple toe loop while training at the Mariposa with Lee Barkell.

And the quads were back on Wednesday night. American Ross Miner, looking very fit, landed a quad Salchow and leads the men’s short program with 80.24 points. And surprise of all surprises, unheralded Ronald Lam, who has trained with coach Bruno Delmaestro of Coquitlam, B.C, since he began to skate, landed a quad toe – triple toe and is in second place at 73.75.

Lam, formerly in Skate Canada’s fold, switched nationalities to Hong Kong in the run-up to the Sochi Olympics. He didn’t make it to Sochi, but quietly silenced many other more highly ranked skaters with his efforts on Wednesday.

In third place is Jeremy Ten at 69.22, without a quad. He’s decided to forgo the quad at this competition because he just got a new pair of boots a week ago and didn’t want to risk injury. He’ll save the pyrotechnics for Skate Canada in two weeks. He’s got a quad though, and was pleased to know that Buttle was at the event: Buttle was his hero.

Kevin Reynolds, Canada’s Quad King, is in seventh place at 64.56 and not at all sure how he’s going to get through the long program on Thursday. Boot problems continue to frustrate him to distraction. Last year, he went through nine pairs of boots, trying to resolve problems surrounding his uncommonly narrow heel, and this year, thinking he was on a track to solve it, well forget it. He’s gone through four more. Each new pair breaks down in a week or two. As he said, it’s “unsustainable” for him to catch the feeling. He was hoping for better in the next week, but competitions don’t wait.

Even Brendan Kerry of Australia landed a quad in the short program. It’s not new for him. He landed one at Australian nationals in 2012, and everybody at home got excited at the first quad by an Australian in a decade when Anthony Liu competed.  Kerry is in sixth place, about a point and a half behind Nam Nguyen, who popped his Lutz and has 66.08. Nam plans a quad Salchow for the long. And he declared that he wants to win the Canadian championships this year.

The other quad people – Meagan Duhamel and Eric Radford, who promise a throw quad Salchow in the free – skated with a freedom they’ve never enjoyed before to win the pair short program with 68.92 points, well ahead of Jessica Calalang and Zack Sidhu of the United States with 59.02 points. An exciting new Canadian team, Natasha Purich and Drew Wolfe are in third place with 54.84 points – even though Wolfe had never skated pairs before five months ago. Coach Richard Gauthier says he’s never seen a skater learn pair skills so quickly.

Papadakis and Cizeron came to Canada for choreography last spring. They ended up staying.

And Wednesday, they used the spit and polish that they learned from Marie-France Dubreuil and Patrice Lauzon – and French import Roman Haganauer – to win the short dance at the Autumn Classic, the first senior B international event ever held in Canada. Granted the Mariposa School of Skating has seen lots of international skaters in its heyday, but never so many in a competition.

Papadakis and Cizeron won with 59.74 points, 4.44 points more than Alexandra Paul and Mitchell Islam, who are skating with a newfound confidence after making it to the Sochi Olympics last February. The experience left a mark on Paul and Islam – in a good way – and they performed an expressive Paso Doble.

Daleman fired off a confident triple toe loop – triple toe loop combination and stumbled a bit on the landing of a triple flip, but the effort was stellar, worth 59.38 points, especially considering she was ill a week before the Autumn Classic.

She was sick for a week, she said, and finally went for some tests that confirmed only that she had pushed too hard in training while suffering from a virus that’s hard on the body. “I couldn’t walk without shaking,” she said. But she was back on the ice for a week before this event.

“This is a great way to start the season,” she said. “I had a little difficulty with the flip, but I’m so proud of what I’ve done.” She said she’s come to this season with a new attitude: grateful to have the chance to do what she loves.

She sailed past Angela Wang of the United States, who is in second place. Julianne Seguin got 54.18, even though she had little time to train for this event. She had just returned from Dresden where she and pair partner Charlie Bilodeau won the Junior Grand Prix and qualified for the Final. So far, she’s juggling both pairs and singles.